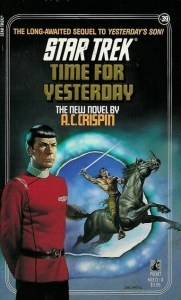 Time for Yesterday by A.C. Crispin
My rating: 3 of 5 stars

On it’s own Time for Yesterday by A.C. Crispin is a decent, fun Star Trek novel whether one has read it’s precursor novel Yesterday’s Son.  With that said, one’s enjoyment of the novel and understanding of the interactions between Kirk, Spock, and McCoy (as well as the majority of the TOS Enterprise crew) with Zar can only come after having read Yesterday’s Son.  The book contains two plots that cross with one another thanks to time travel, but it’s the initial one of the malfunctioning Guardian of Forever that comes across as the better of the two especially as the reader meets the creators of the Guardian.

Having been given this book by a relative, I didn’t know what to expect.  The book was a fun read, but after the Guardian plot was wrapped up the rest of the book was missing the backstory that Yesterday’s Son would have provided.  So you’re thinking about reading this book without having read Yesterday’s Son, I recommend you don’t.  Find Yesterday’s Son either on Kindle or at a used book store or at a friend’s house and read it first before Time for Yesterday.  I fully intend to find Yesterday’s Son so I can re-read this book and have a better appreciation (and review of it).