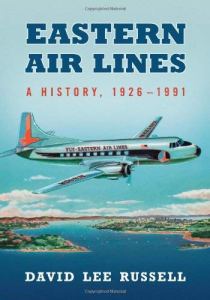 I received this book via LibraryThing Early Reviewers in exchange for an honest review.

The history of Eastern Air Lines is one of innovation and enterprise as well as one of how bad decisions are hard to overcome, especially when compounded.  In relating the history of one of the major commercial airlines of the last century, David Lee Russell also told the history of commercial aviation in the United States up until early 1991 which until deregulation during the Carter Administration was entirely different than it is today.  Eastern’s history is not only that of a company, but also of individuals.  Russell writes brief, yet informative biographies of  Harold Pitcairn, Edward “Captain Eddie” Rickenbacker, and Frank Borman who led the company throughout it’s history as well as other figures who contributed to Eastern’s successes or failures.  While Russell does a tremendous job in describing how Eastern rose to the heights of its success, the strongest part of his writing is in describing how Eastern died and summarized the reasons at the end of the book.