Tower of the Hand, is a site dedicated to George R.R. Martin’s A Song of Ice and Fire book series as well as it’s adaptation HBO’s Game of Thrones.  As part of their site, they have chapter summaries for every chapter in every book and novella of the ASOIAF world.  On each summary page a site member can give their own personal rating for that chapter as a way to show how they liked or disliked the writing, the events, and etc.  So as part of my ASOIAF features here, I’m posting my personal chapter ratings for A Game of Thrones.

Other Chapter-by-Chapter posts:
A Clash of Kings
A Storm of Swords
A Feast for Crows
A Dance with Dragons
The Winds of Winter
A Dream of Spring 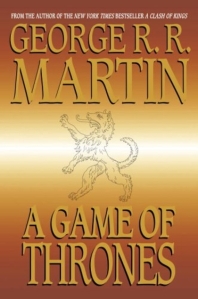 A Game of Thrones by George R.R. Martin
My rating: 4 of 5 stars

The rules are thrown out the window in A Game of Thrones as the book that started it all brings to life fantasy versions of numerous time periods with a real life flare plus a little magic.  George R.R. Martin began with well-heeled clichés then either flipped on their heads or just bulldozed them as he explores the great tale of A Song of Ice and Fire.

After an intriguing setup with ice monster, Martin completely ignored the lands beyond the Wall and focuses on the political machinations far to the south in which fantasy clichés meet hard reality.  The honorable hero (Eddard Stark), the first non-prologue character the readers encounter that must be the main protagonist (Bran Stark), and the dwarf who must be evil because he’s different (Tyrion Lannister) are just a few classic fantasy clichés that Martin completely obliterates with death, crippling, and turning out not to be an evil person at all.  All three and many more I haven’t listed point-of-view characters are given enough chapters and time in the book to come out as real people facing real challenges and responding to them based on the personalities Martin establishes for them.

Political intrigue almost a generation after a successful rebellion put a new dynasty on the Iron Throne and how characters respond to that intrigue is the major focus of the book (and thus its title).  The differences in Westerosi culture based on geography play a role throughout the book as do medieval gender roles.  Through almost 700 pages of twists and turns that covers more than a year on two different continents, the reader not only has an easy grip not only the narrative of the book but also the world its set in.  Each reader will soon have their favorite characters they’ll look forward to reading and want more of and also have their least favorite characters, which is also okay.

A Game of Thrones launches the reader into the world of Westeros (and Essos) and never lets them go.  From political intrigue, to secrets from the past, to a real life feel to fantasy, and just a dash of magic (DRAGONS!) George R.R. Martin’s first book of his fantasy series has something for everyone.