Tower of the Hand, is a site dedicated to George R.R. Martin’s A Song of Ice and Fire book series as well as it’s adaptation HBO’s Game of Thrones.  As part of their site, they have chapter summaries for every chapter in every book and novella of the ASOIAF world.  On each summary page a site member can give their own personal rating for that chapter as a way to show how they liked or disliked the writing, the events, and etc.  So as part of my ASOIAF features here, I’m posting my personal chapter ratings for A Dance with Dragons.

Other Chapter-by-Chapter posts:
A Game of Thrones
A Clash of Kings
A Storm of Swords
A Feast for Crows
The Winds of Winter
A Dream of Spring 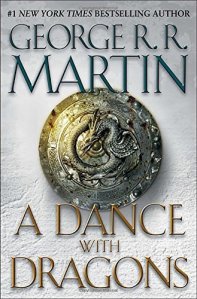 A Dance with Dragons by George R.R. Martin
My rating: 4 of 5 stars

As crows feast over the carrion of southern Westeros, in the steadily wintery North and the sun-soaked far east of Slaver’s Bay there is A Dance with Dragons both literally and figuratively. After waiting five years in between the fourth and fifth installments of A Song of Ice and Fire, George R.R. Martin brought back the stories of Jon Snow, Tyrion Lannister, and Daenerys Targaryen after a ten year wait after finishing A Storm of Swords. As with A Feast for Crows, this book shows how new leaders handle responsibility and the results of their actions.

While the previous book had a feeling of intimate focus, A Dance with Dragons returned to the grand scale that had given Martin’s series one of its biggest appeals. The majority of the book takes place in North or Meereen, whether in the city or traveling towards it. At the Wall, Jon has to juggle the needs of the Stannis Baratheon, the Night’s Watch itself, the Wildlings, and more importantly the Others who look to take advantage of men divided against one another. Just a little south, the Boltons and Freys look to secure the North as Theon Greyjoy reeks out an existence within the confines of Winterfell all the while as his sister Asha marches with Stannis as the coming of winter hits hard without knowing that Davos Seaworth has discovered that ‘the north remembers’. Tyrion’s escape from King’s Landing and his eventual journey to the far east of Slaver’s Bay is full of soul searching, the need to survive, and finally the thrill of political intrigue especially as he sends another Dragon west towards Westeros. Wherein Meereen, Dany is finding ruling a conquered city challenging especially after confining her dragons and must compromise to bring peace from her foes within the city walls all the while enemies approach without as well as several friends.

The much lamented “Meereenese Knot” that Martin talked during the writing of A Dance with Dragons, is the area of the book in which many are dissatisfied, including myself to an extent. In all honesty, the majority of Dany’s chapters were my least favorite of the entire book which made me not look forward to anything related to Meereen until after she had ridden out of the city in style. Once Dany had left, in her place came Barristan Selmy who seemed to get things moving with a little help from Quentyn Martell. Although the later character’s story was a fiery catastrophe, Barristan made me look forward to seeing Meereen again as things were actually happening. Given the issues and personal dilemmas that Dany was facing, it felt that it was parallel with Jon however Martin seemed to write Jon’s chapters better than Dany’s which made Meereen a slog until she left and when she did her chapters improved dramatically.

The first 60% of A Dance with Dragons takes place at the same time as A Feast for Crows and it isn’t until the final two-fifths of the book that the entire epic feels whole again as previous POV characters Cersei, Jaime, and Victarion make important appearances. However there is one important new character making a first appearance in this book that could considerably change the political landscape of Westeros for better or ill as The Winds of Winter hit the continent.

After a wait of five and ten years respectively for this installment and for a lot of these characters, A Dance with Dragons is a very good book. Although one major point of view character’s chapters are not up to par with those from previous books, the great writing of other major and secondary characters more than makes up for it resulting in a harrowing and thrilling latter part of the second act of A Song of Ice and Fire.

Tower of the Hand, is a site dedicated to George R.R. Martin’s A Song of Ice and Fire book series as well as it’s adaptation HBO’s Game of Thrones.  As part of their site, they have chapter summaries for every chapter in every book and novella of the ASOIAF world.  On each summary page a site member can give their own personal rating for that chapter as a way to show how they liked or disliked the writing, the events, and etc.  So as part of my ASOIAF features here, I’m posting my personal chapter ratings for A Feast for Crows.

Other Chapter-by-Chapter posts:
A Game of Thrones
A Clash of Kings
A Storm of Swords
A Dance with Dragons
The Winds of Winter
A Dream of Spring 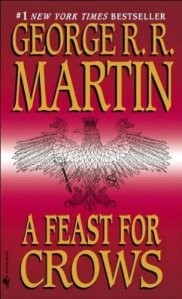 A Feast for Crows by George R.R. Martin
My rating: 4 of 5 stars

The War of the Five Kings is all but over with only a few holdouts remaining in the realm, however as Westeros attempts to recover enough before winter hits it appears that more carrion will be on the menu of A Feast for Crows. The fourth installment of George R.R. Martin’s A Song of Ice and Fire series shows the ugly aftermath of war which other fantasy epics seemingly ignore after the triumphant conclusion, but as the middle of Martin’s series begins it shows that politics and opportunists use any situation for their advantage.

Unlike the first three volumes of the series, Martin divided narrative settings in half with some point-of-view characters appearing in Feast while some had to wait until the fifth volume (A Dance with Dragons). With the focus on the events in southern Westeros, primarily King’s Landing and the Riverlands, the story feels more intimate than grand as the previous volumes did. The fallout of Tywin’s death is felt in King’s Landing the most when Cersei takes control and attempts to outshine her father in governance, yet it caught up getting entrapped within her own web of intrigues. Jaime’s story shows a man looking to redeem himself while taking advantage of his dishonorable reputation in wrapping up the war in the Riverlands. Along with the Lannister siblings, readers followed Arya to Braavos where she happened to interact with a traveling Samwell Tarly headed for Oldtown who on his journey sailed around a conspiracy filled Dorne and saw the effects of events among the Ironborn. Within the untouched Vale finds Sansa Stark under a false name watching as Littlefinger schemes to retain power and set up events for the future. Yet Martin’s best writing is following Brienne of Tarth’s quest to find Sansa in the war ravaged hinterland, showing off the results of war upon the land and the populace which is often avoided in other epic fantasy.

While many fans have found the division of the narrative upsetting and following Brienne’s journey annoying, some didn’t realize how much set up Martin was writing for events in the last 40% of A Dance with Dragons as well as the last two books of the series. In the chaos of war’s aftermath just like in battle, anyone can take power and some who thought themselves natural wielders of power are outplayed in the game of thrones. The events in Dorne and the Iron Islands change the completion of the entire series, making it more epic in scale when seen in context of the whole story. One of Martin’s best decisions was to both begin and end in Oldtown with characters introduced in the prologue appearing again at the end from the point-of-view of a favorite character in a sense connecting the whole book together.

A Feast for Crows shows the aftermath of war as well as showing that schemes for power never end, especially as a realm tries to put itself together after it was shattered by war. While not as “epic” as the first three volumes of A Song of Ice and Fire, this book is still a fantastic read on why the game never ends.