Skip to content
HomeThe Millennium Bug: Is This the End of the World as We Know It? 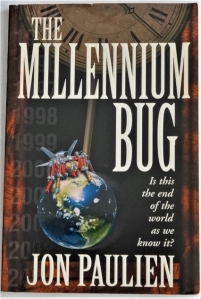 The Millennium Bug: Is This the End of the World as We Know It? by Jon Paulien
My rating: 2.5 of 5 stars

The world approached the year 2000, the threat of disaster due to a glitch in programming to our technological world was all the rage in the media only to fizzle out. However Jon Paulien’s The Millennium Bug is not about Y2K, but about how Christians—more specifically Seventh-day Adventists—should approach the then upcoming calendar change to 2000 when thinking about the “end times”.

Almost 20 years ago, the world was getting both excited and anxious about the upcoming new millennium. Besides the magically alluring numeral 2000, there were questions about if the change would adversely affect computers causing chaos and to many Christians if this change in millennium would see Jesus’ Second Coming. Paulien examines all the theories surrounding the millennium with the Second Coming and why Adventists with their history of Great Disappointment were even getting infected with “the millennium bug”. Yet while Paulien was informative with all the reasons why the calendar change to 2000 was just artificial especially in light of what occurred leading up to the year 1000, when he turned to what Adventists should concentrate on when thinking about “the end times” a lot of his writing would suggest checking out his a previous book of his on that subject instead of giving complete answers in this particular book.

While this fact was a tad frustrating, Paulien went a long way in answer many question dealing and surrounding various ‘end time’ theories in which millenniums are involved whether dealing with the age of the Earth or when the millennium of Revelation occurs. The Millennium Bug isn’t perfect and in parts a bit dated, it is still a good quick read of information.

4 thoughts on “The Millennium Bug: Is This the End of the World as We Know It?”