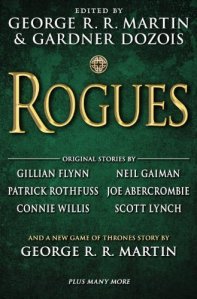 The Rogue Prince, or, A King’s Brother by George R.R. Martin
My rating: 2.5 out of 5 stars

One of the major political and military individuals in the Targaryen Civil War, also known as The Dance of the Dragons, Prince Dameon Targaryen etched his name into the history of Westeros well before he fought for his wife’s right to the Iron Throne. Living almost two hundred years before the main events of George R.R. Martin’s A Song of Ice and Fire, “The Rogue Prince” details the life of a man who was grandson and brother to kings as well as father and grandfather of kings in a line that leads to present.

Daemon Targaryen is a man whose actions would have ramifications for centuries to come, yet in his own biography he is overshadowed by the events and happenings that would lead to The Dance of the Dragons. Yet while most of the text focused on the background to the war Daemon would fight, events of his life that continued to shape Westeros were explored. After failed stints on the small council, Daemon would take charge of the city watch of King’s Landing and reform them to become the Gold Cloaks. Daemon’s alliance with House Velaryon in war, marriage, and politics that would have a profound effect on the later war and it’s aftermath. And Daemon’s rivalry with Hand of the King Otto Hightower over his brother entire reign that gave the King no end of trouble.

Written as a history of events leading up to The Dance in the form of a biography by an Archmaester of the Citadel, Martin mimics many popular biographies of the present day in writing this fictional history. Like many biographies of major players in the American Civil War in which the chain of events and movements that lead to the Civil War at times takes over the biography, Martin’s “The Rogue Prince” follows the lead up to the Targaryen Civil War more than the titular subject yet in a very intriguing way that makes the reader wish Marin might one day write an actual story of one of Daemon’s great adventures or misdeeds.

“The Rogue Prince” is both like and essentially a prequel to “The Princess and the Queen”, a vivid retelling of history of events that surprisingly do connect with George R.R. Martin’s main series as well. However, instead of following the promised roguish Daemon the history is not a biography but a backdoor history text that chronicles the events over the years that lead to The Dance of the Dragons. Thus even though an avid reader of history I enjoyed this piece, the focus away from the roguish titular character leaves something to be desired of the whole.