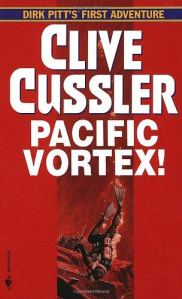 Pacific Vortex! by Clive Cussler
My rating: 3.5 of 5 stars

A mysterious area at sea just off the coast of paradise, a missing advanced Navy submarine, and a dashing Air Force pilot that loves the sea and women just seems like adventure. Pacific Vortex! by Clive Cussler was the sixth Dirk Pitt book published, but was the first story written by Cussler featuring Pitt that he finally relented in having published and as all the classic elements that signify a book in the series.

A new advanced Navy submarine is taking its shakedown cruise when its commander decides to investigate an anomaly of both weather and sea floor, the sub disappears and resulting search finds nothing. Six months later, Dirk Pitt is on vacation in he spots a communication capsule from the missing submarine and after delivering it to Naval base is seconded from NUMA to 101st Salvage Fleet and learns of titular Pacific Vortex in which 38 ships have disappeared. Bringing both a fresh expression and information he’s learned from a local native Hawaiian, Pitt deduces that everyone has searched in the wrong area and a potentially lost island might be near where the ships are. In the resulting search, Pitt and the Navy find the sub but can’t begin salvaging because they are attacked forcing them to retreat. The attack continues on Oahu as the daughter of the admiral heading the 101st is kidnapped and Pitt almost murdered by the leader of the mysterious group. The Pentagon decides to strike the area with missiles to destroy not only the sub but any threat from the area in the future, but Pitt mounts a rescue mission for the admiral’s daughter and the sub before the strike. Unfortunately his plan fails, but luck allows both the rescue of the sub and admiral’s daughter to workout but not without a sacrifice on Pitt’s part.

Overall this is a quick paced book that keeps the reader engaged with its action and doesn’t slow down even when exposition occurs in the text. While Pitt himself is fleshed out, other characters are for the most part two-dimensional though given the type of book this is. Obviously there are a lot of clichés throughout the text, but even Cussler is smart enough to flip some on their head especially when book’s antagonist chides Pitt for thinking he can trick him into telling him his evil plan. The classic car and legendary location that connects to the sinister plot are the primary motifs that this series is known for that make major appearances showing that from the beginning were always there. The biggest flaw is that given what occurs later in the series about events taking place in this book, there is a major plot hole.

Pacific Vortex! is good adventure story that has shades of James Bond, but is very much something completely different. This first adventure of Clive Cussler’s character Dirk Pitt, it does not have to be read first or sixth but whenever you decide to if you’re reading any books in the series. If you’re into adventure, thrills, and quick books to read this is one to consider.