Skip to content
HomeTwo-Fisted Tales of St. Nick (Tales from the Eternal Archives #1) 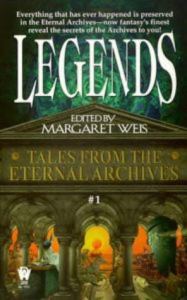 Two-Fisted Tales of St. Nick by Kevin T. Stein and Robert Weinberg
My rating: 3 out of 5 stars

The story of the real Saint Nicholas is a little more brutal than the clean version we know today. Told from the memory of his sparring partner Hammer, we learn that Nicholas was a boxer who allowed a poorer and lower-class Hammer to beat on him in their sparring sessions until Hammer realized that he was taking out his frustrations on the innocent Nicholas. Afterwards the two became friends and trained together and Nicholas even helped Hammer start his own gym. One night they passed an old man’s house and overheard the man telling his daughters that he didn’t have enough money for dowries and would have to sell one of them into slavery. Nicholas decided to help the man out by getting money through a challenge series of boxing matches. After winning relatively two easy bouts, Nicholas places his winnings in the old man’s house. Then Nicholas faces the main attraction in ‘the Mangler’ and gets beaten to a pulp but doesn’t quiet which eventually forces ‘the Mangler’ to quit because Nicholas wouldn’t. On Nicholas’ final trip into the old man’s house, he’s discovered by the man’s youngest daughter who eventually becomes his wife. Hammer then ends his story by saying that because of Nicholas’ gift giving he decided to do the same with his family though he doesn’t think it’ll last after he dies. Overall this was a nice angle on the traditional story; however my biggest problem was the style of the delivery than the plot itself.