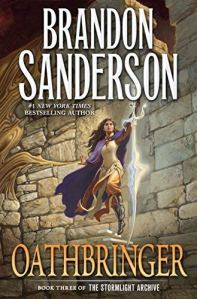 Oathbringer by Brandon Sanderson
My rating: 4.5 of 5 stars

The Everstorm is striking Roshar and a new Desolation has begun as the once docile parshman become conscious gathering to face off against humans who’ve owned them for millennia, however nothing as it seems in the long view of history. Oathbringer, third installment of Brandon Sanderson’s The Stormlight Archive, immediately picks up where the story left off as the survivors from the clash on the Shattered Plains regroup in the legendary home of the Knights Radiant and attempt to bring together all the humans on Roshar but hard truths and politics stand in the way.

Dalinar Kholin’s actions in the past and those in the present dominate the book like Kaladin and Shallan’s did in the previous two installments, whether through his own eyes or those of others. Setting up base in Urithiru, Dalinar begins slowly and diplomatically piecing a coalition together though his own past is a major liability. Using his connection with the Stormfather, Dalinar has other rulers join him in his visions setting up a connection with Queen Fen of Thaylenah and slowly building a relationship. However his attempts with doing the same with the Azir Prime is complicated by Lift no trusting him initially and the bureaucracy around the young man as well. But its Dalinar’s bloody past which turns out to be his own worst enemy as we see through his flashbacks a different man who loved battle and bloodlust, two traits nurtured by Odium to create his champion for the conflict to come but which turn against the enemy when Dalinar accepts his past and uses it to defend Thaylen City.

Kaladin and Shallan continue progressing through their respective development while Adolin’s slows a bit so as to give time to his cousin Jasnah and the former Assassin in White, Szeth, time to develop into major secondary characters throughout the book. Through scouting and spying, Kaladin first assesses the actions of the newly awakened parshmen though not without gaining relationships with them, a fact that haunts him when he faces them later in battle and creating a moral crisis that prevents him from stating the Fourth Ideal and almost kills him, Adolin, and Shallan if not for Dalinar’s actions. Shallan has her own growing crisis throughout the book, multiple personality disorder, which is exacerbated through her Lightweaving and attempts to not be the “scared little girl” she’s always seen herself as. Though she does not fully overcome it by the end of the book, she has begun dealing with it especially with help from Adolin who is dealing with his own issues stemming from his killing of Sadeas in regards to his place in Alethi society now that the Knight Radiants are reforming. Though Szeth’s progresses through his Skybreaker training with “ease”, his view of the order and of the overall conflict dovetails with the revelations that nearly destroy Dalinar’s fragile coalition. These revelations also correspond with Jasnah’s development and her concern for Renarin, whose own spren bonding is a revelation in and of itself as history and expectations are quickly being subverted.

Unlike the previous two books, Oathbringer is not as action-packed but is more centered in expanding the understanding the various peoples and politics of Roshar. While the beginning of the “overall” story was a bang, Sanderson turned the focus from one main area to many which resulted in building the world he created with different peoples with different cultures and long complicated histories interacting with one another during the beginning of what might be a long conflict. Add on top of this the fact that the ancient history that many believed to be true was not and as a result some are choosing a different side than what is expected of them plus the influence of Odium on everyone, and the next seven books in the series look to be very intriguing. Though the book’s length is once again an issue, around 1250 pages, attempting to do so much in one book it was the only result. And if there were flaws, it was mostly the perceived open-ended ways some events happened that were either a mystery to be solved later either in this book or another or just to be left open for no reason.

I will not say that Oathbringer is a perfect book, but it was a different change of pace after the first two books in The Stormlight Archive which helped continue the narrative while expanding it over more of Roshar. Knowing when to “subvert” the standard grand fantasy narrative is always a challenge, doing it this early in the series right now looks like a good move on Brandon Sanderson’s part and I’m interested to see where the story develops going forward.

2 thoughts on “Oathbringer (The Stormlight Archive #3)”