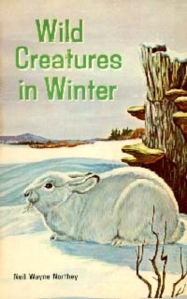 Wild Creatures in Winter by Neil Wayne Northey
My rating: 5 of 5 stars

Wild Creatures in Winter is the fourth and final volume Neil Wayne Northey’s Old Homestead series. Like the previous volumes in the series this is a quick and pleasant children’s book that follows the lives of numerous animals that inhabit the area around the series’ titular location. Unlike the previous three books that could be read out of order, this book needs to be read last as all the animals followed were previously introduced in the other books in the series. Yet despite this one difference from the other books, it’ll still provide enjoyment to young children either reading on their own or being read to by their parents.