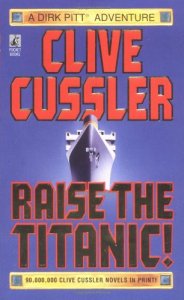 Raise The Titanic! by Clive Cussler
My rating: 2.5 of 5 stars

Deep in the North Atlantic is the rarest radioactive mineral on the planet that can power a strategically redefining missile defense shield, the problem is that it’s in vault of the most famous shipwreck in history. Raise the Titanic! is the third published book of Clive Cussler’s series featuring Dirk Pitt, who accepts the challenge to bring the most famous shipwreck in history only to find himself in the middle of a shadowy Cold War encounter in the middle of a hurricane.

A secret U.S. government think tank, Meta Section, sends a mineralogist to Novaya Zemlya in the Soviet Union to look for byzanium that will power their new antiballistic missile defense system. Unfortunately the scientist is discovered by Soviet security until he’s saved by Dirk Pitt whose “interference” of Meta Section’s plan upsets its chief, Dr. Gene Seagram who is married to a NUMA colleague of Pitt’s. The mineralogist how has both good and bad news, Novaya Zemlya does have byzanium but only a tiny fraction that did because it was mined earlier in the century by Americans from Colorado. Gene Seagram and his closest friend in Meta Section begin hunting down this new lead while Captain Prevlov of Soviet Naval Intelligence begins investigating the American incursion of Soviet territory both the recent and newly discovered mine from the turn of the century. Meanwhile Gene Seagram’s quest to get his secret project completed results in his wife Dana leaving him just as he learns that large amount of byzanium was found on Novaya Zemlya by Coloradan miners who spirited from Russia to Britain and loaded it on the Titanic. Gene Seagram finds Pitt and convinces him to lead the salvaging of the shipwreck. Over the course of the salvage, both American and Soviet intelligence agencies have a shadowy back and forth that Pitt only learns about close to the end of salvage which comes to a dramatic end when they raise it to save one of their submersibles. In preparing to tow the now risen Titanic, Pitt and crew learn that a mid-May formed hurricane is barreling towards them which for Prevlov is prefect for his plan to steal the ship and its “secret” cargo. Prevlov and his strike force board the Titanic while it’s in the eye of the hurricane and take the crew hostage, save Pitt, who confronts the Soviet captain before several minutes before Navy SEALS take out the Soviet soldiers except for Prevlov. The Titanic makes arrives in New York to fanfare, but Meta Section and NUMA learn that their efforts were for not because in the ship’s vault were only boxes of normal stones. Gene Seagram, who had slowly been losing his sanity, has a complete nervous breakdown and attacks the mummified remains of the last American miner who by coincidence was also insane by the time he boarded Titanic. Pitt travels to Scotland and makes his way across Britain until he finds a tiny village where one of the American miners was buried, with the bzyanium thus allowing the U.S. to create its missile defense system.

Written almost a decade before the Titanic was discovered, in two pieces, Cussler writes an intriguing narrative of underwater discovery and salvage with some nice Cold War intrigue thrown in. The main plot was basically really fun to read even with the knowledge that Cussler’s details were wrong in every regard to the shipwreck. While the Soviet spy subplot was completely fine as was Gene Seagram’s slow mental breakdown, the other subplots in the book were complete trash. First was Dana Seagram’s independent woman angle in which was asserted herself and also bashed women’s liberation (which went hand on hand with the usual chauvinistic streak of these early books), the second was the President of the United States being persuaded by the CIA and NIA to let Meta Section’s secret project get leaked to the Soviets which was completely unrealistic (even in a story about raising the Titanic!). Even with those I would have been fine, but Cussler for some reason had Pitt bed Dana Seagram after going the majority of the book seemingly like the Pitt later in the series.

Raise the Titanic! for the most part is a good book, which could have been better, but it’s better than The Mediterranean Caper and Iceberg especially since Dirk isn’t a complete jerk. Cussler did write a solid main plot, but the biggest problems were some of the subplots which undermined the work plus some poor decisions around Pitt close to the end. However, after Pacific Vortex this is the best early Pitt book so far.