Skip to content
HomeThe British Are Coming: The War for America, Lexington to Princeton 1775-1777 (The Revolution #1) 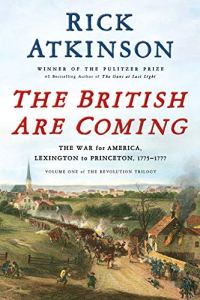 The American Revolution was both political and martial in scope, yet while the high dramatic points are often touched upon it’s the details that are missed where real history can be seen affecting and creating those high points. The British Are Coming: The War for America, Lexington to Princeton 1775-1777 by Rick Atkinson is the first book in a trilogy chronicling the military history of American Revolutionary War from major battles to minor skirmishes to unknown campaigns left out of other general histories of the period.

The account of the Revolutionary War begins in 1773 with the aftermath of the Boston Tea Party put Massachusetts under martial law and the resulting insurgency throughout the entire colony that restricted the royal government’s control to Boston alone. This situation led to the British regulars’ expedition to Concord, via Lexington, thus beginning a colonial rebellion that would slow mushroom into a global conflict. From this beginning Atkinson chronicles the military events of the war over the next two years in as best chronological fashion he can provide with multiple theaters opening up from Boston to Virginia to Canada to the Carolinas to New York and New Jersey with multiple other little events happening around the colonies as well. Atkinson avoids venturing into the political aspects of the Revolution save for how it directly affected military affairs thus George Washington’s appointment and the Declaration of Independence shaping the American military cause are covered, on the flip side the politics on the British side especially George III’s view and how the British government’s instructions to it’s commanders and the logistics of a transatlantic war were covered in-depth to provide context to the how and why of various British strategies. And the slowly developing diplomatic “front” which would be important later in the war is given its groundwork beginning, centered around Benjamin Franklin.

The approach Atkinson takes in his chronicle of the American Revolutionary War is first and foremost a military history with political, diplomatic, and social influences of secondary importance and in context of their influence on the military situation. In previous histories of the period I’ve read, the civilian governments support, or lack thereof, of the Continental Army were focused on a lot but Atkinson flips the narrative and focuses more on the British side to emphasize the transatlantic nature of their war effort especially as their expectations of loyalist support in both manpower and supplies. Atkinson brings forth many minor engagements surrounding better known battles, first in the Canadian expedition and later in various Southern colonies/states in 1775-6 that general histories do not touch on. While Atkinson is good in providing biographical information to many important participants from both sides as well and how disease affected both sides, it is also where some of his biggest mistakes and oversights occurred that left one scratching their head but not bad enough to ruin the whole of the book.

The British Are Coming begins Rick Atkinson’s military history trilogy of the American Revolution in dynamic way while also giving the reader a new view of the period. The emphasis of the historical narrative on the martial conduct of the war from major battles and campaigns to minor engagements as well as giving a clearer focus on the British side of the conflict makes this different from other books of the period I have read and has me looking forward to the next book.