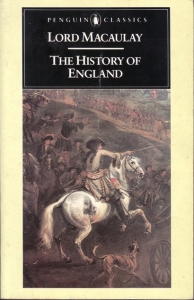 The History of England by Thomas Babington Macaulay
My rating: 2.5 of 5 stars

The progress of history is ever moving forward, away from superstition and autocracy towards free-thought and greater liberty, at least that what Lord Macaulay believed. In his The History of England (from the Accession of James the Second), Macaulay brings forth “the Whig interpretation of history” for the first time that changed how history was interpretation for the next century.

This abridgment of Macaulay’s five-volume history of events leading up to the Glorious Revolution during James II reign through the death of William III begins with Macaulay’s purpose for his work. The first half of the abridgment covers how James II began his reign by slowly alienating his traditional supporters in the Anglican Church and Tory county squires by putting Roman Catholics in high positions and supporting the Irish against Anglo-Scot colonists. Even though he survived one rebellion early in his reign, James kept on escalating his efforts until both “Exclusionist” and Tory politicians—including moderate Roman Catholics—joined forces to invite William to take the throne. The second half of the abridgment covers William’s invasion and the Revolution in all three Kingdoms, not just England. While the English portion was political rather than martial, it was not the same in Ireland and Scotland as battles between those supporting James and William took place in bloody fashion though mostly in Ireland. Another bit of history was the religious aspect of the Revolution, while in England there was more toleration in practice which included Roman Catholics it was a different matter entirely in Scotland were Presbyterians retook control after suffering under Restoration policies for over 30 years. Finally, the effects of the Revolution on finance and Parliamentary corruption are examined before Macaulay’s final summing up.

While Hugh Trevor-Roper did an admirable job in selecting portions over five volumes into approximately 550 pages, it is also the main problem with the book. With such a reduction of Macaulay’s prose, the reader gets glimpses of his thoughts and intentions but without consistency the reader doesn’t get the importance of the overall work. As for the work itself, Macaulay’s bias of excusing his hero (William III) and aggressively character assassinating those he dislikes (Marlborough), is one of the biggest flaws.

The History of England is a glimpse into the larger work of Lord Macaulay that really doesn’t give the reader a constancy to see why it was such an important piece of historical literature. If given the choice, I would have chosen five books of the total work over a short abridgment.

2 thoughts on “The History of England (abridged)”