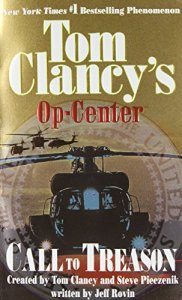 Call to Treason by Jeff Rovin
My rating: 1 of 5 stars

The death of a British financial giant after attending a party hosted by a U.S. Senator that’s ready to start a third-party run for the White House grabs headlines then a suddenly downsized Op-Center gets a call from Scotland Yard. Call to Treason is the eleventh book written by Jeff Rovin of the Op-Center series as a suddenly out-of-work Mike Rodgers is recruited by Senator Orr to be apart of this third-party run for the White House when Op-Center begins investigating the death of a British financier who’s business ideas opposed those of the Senator thus forcing Rodgers to make some hard choices as events unfold.

General Mike Rodgers attends a party thrown by Senator Don Orr and finds himself being recruited to join the Senator’s team for a run for the White House, also at the party is British financier William Wilson who hours later is killed in his hotel room by an unknown woman with an injection underneath his tongue. The next day Rodger’s learns from Paul Hood that Op-Center’s budget has been slashed and he is out of a job which makes his decision to join the Orr campaign easy but then Darrel McCaskey gets a call from Scotland Yard to take a look at the Wilson’s death he finds the injection site with he coroner and suddenly Op-Center is investigating the death and having to investigate Senator Orr’s party guests and his staff making Rodgers be in a tough spot. Orr’s soon to be Vice Presidential candidate Admiral Link, a former head of Naval Intelligence and director of covert ops at the CIA, thinks this is Hood trying to get Op-Center’s funding back and is hostile to Rodgers. Then a American businessman is murdered the same way as Wilson making it appear like a serial killer, but McCaskey’s wife Maria Corneja sees it as a way to distract from Wilson. The two hit the pavement and the misdirection gets them to focus on Link and Orr’s staff, which results in Link sending an E-bomb to Op-Center that knocks out all their electronics and kills someone. Though he had told Hood he was resigning that day, Rodger’s is pissed at the death of a coworker and tells Hood he didn’t official change his resignation date and will join the investigation. McCaskey and Corneja find out that a Washington detective was being blackmailed then using information that Rodger’s remember from his interaction with Orr’s staff arrest the killer while Rodgers realizes he’s being had at the third-party convention in San Diego when suddenly Link is kidnapped. However, Rodger’s figures out that the target is Orr and stops his abduction then locates Link who admits that he had the second victim killed to keep his plan to discredit Orr and force him out of the race especially after Orr had Wilson killed. Orr and his staff are arrested the next day and Rodgers effectively kills the newborn third party.

From the beginning this book was a mess, the first thing was slashing Op-Center’s budget in the era of Homeland Security and the War on Terror which were referenced in the book when the exact opposite would have happen especially given Op-Center’s record of taking out terrorists. The downsizing was essentially a vehicle to get Rodgers on Senator Orr’s team to make his conflict of interest to add to the story, only it became frustrating since it rolled back character development of several books. But the worst part of the book was the unreliable narrator device Rovin used for two character POVs to create a surprise twist at the end of the book, however given that over 10 books and every other POV in this book he had never used this device before thus making it’s inclusion problematic at best or just plain lying to readers at worst. The only good thing I could say about this book were the McCaskey’s interacting with one another.

Call to Treason is the penultimate book in the first run of the Op-Center series, but it’s probably the worst. Since finishing the book my view of it has diminished a lot as it seemed that Jeff Rovin was told that the series would be ending after the next book, War of Eagles, and he decided to just call it in. The result was a insult to readers who were teased with a potentially interesting political thriller and were instead given a Swiss cheese novel with glaring plot holes and diminished characters.